How does John Petrucci like to spend his days off while on tour?  By flying to the Mesa/Boogie factory of course!  It has been a few years since John has visited us here in Petaluma, CA.  We all felt that the idea of catching up and hanging out was  perfect.  John spent the afternoon sharing stories and tones with Randall Smith, Doug West, Jim Aschow, John Marshall, and myself.

It has been great working with John all of these years because he is so hands on with his tone tweaking and rig building.  The relationship has grown into a true partnership where ideas are exchanged freely in regards to amplifier design.  We have all been fans of Dream Theater since the beginning (John helped form the Progressive Metal band in 1985).  Parallels can be drawn between Mesa/Boogie and Dream Theater in regards to work ethic, composition and creation, and the endless pursuit of tonal possibilities.  Obsession? Perhaps.  Regardless, these are the qualities that make relating on these deeper levels so easy - and fun!

Our afternoon turned into a very late evening of great conversation and laughs.  (It was time to get back to work!)

Mesa/Boogie met back up with Day 8 of the Iron Maiden & Dream Theater North American 2010 Summer Tour on June 20 at the Sleep Train Pavilion in Concord, CA.  John's tech, Maddi was working on guitar set ups for the day on John's Ernie Ball Music Man JP6 Signature guitars when we arrived.   Each guitar has a daily exercise routine that includes fresh strings, neck adjustment, bridge adjustments as needed, and a good ol' fashioned cleaning.  Check out details of the John Petrucci 6 signature guitar from Ernie Ball here: http://bit.ly/DNnVk 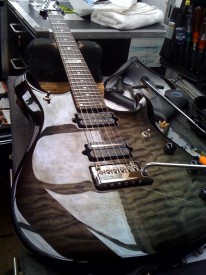 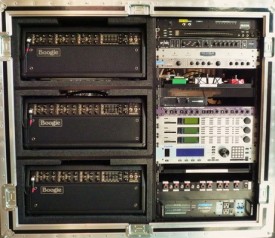 As gear was pared down for some international touring in 2010, John made the switch to the new Axe FX unit by Fractal and just two Mark V heads.  The simpler set up was holding up well so the decision was made to continue with it for the North American Iron Maiden tour.  All of the channel switching selections are made with one head that is fed into the the Axe FX by the FX send of the Mark V.  The signal is then split to stereo with the Axe FX and returned back into the main head's FX return and the other Mark V's FX return.  This routes all tones to the same power section of the second Mark V so you have a true stereo image.  Both racks were built and wired by Mark Snyder. 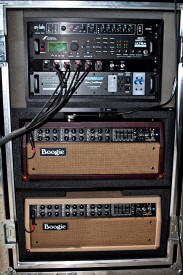 John is still utilizing his Axess Electronics switching pedal board as a controller.  He also has a Dunlop wah controller for the rack unit and an Ernie Ball volume pedal.  Check out the new TC Electronics Polytune pedal too! 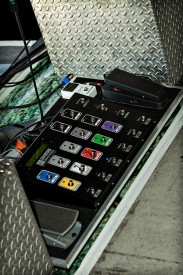 John still tweaks tones and tries different amp settings and modes throughout the tour.  Maddi rolls with it very well as things can change daily.  It is never boring! 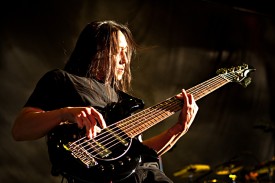 John Myung has been using Mesa/Boogie bass amps and cabinets for a handful of years now as well.  He is dedicated to his craft and continues to dig deep as a technician and musician.  He really holds down the bass role in Dream Theater by playing a perfect balance of in the pocket playing while utilizing incredible chops.  John recently switched to the Ernie Ball Music Man Bongo basses.  He really likes the full, even tone of them.

His current rack includes the M9 Carbine and two Big Block 750s.  They power a Mesa/Boogie Powerhouse 4x10 cabinet off stage that is miked up for the in ear monitor mixes on stage. 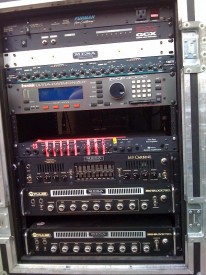 Check out John Myung's other musical endeavor with Kings X's Ty Tabor - Jelly Jam.  There are already two installments and rumors of more to come...

Be sure to grab the latest Dream Theater album Black Clouds and Silver Linings.  Now get out there and catch them live!