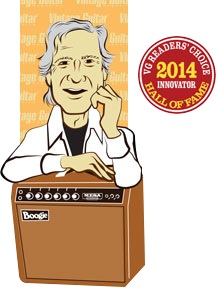 In 1969, Randall Smith was rebuilding small combos into high-performance monsters. The search for more sustain, regardless of volume, led to a breakthrough discovery in 1971 and Randall introduced the world to the MARK I Boogie® with its high gain cascading tube preamp. The sound of electric guitar was forever changed.

MESA/Boogie® is excited to announce Vintage Guitar magazine, the leading publication on vintage and collectible guitars, has inducted founder Randall Smith to its Hall of Fame in the Innovator category. This year’s inductees, as well as winners of this year’s Readers’ Choice Awards, will be featured in the magazine’s April issue. Winners in all categories are determined by a vote of the magazine’s readership.

In the four decades since launching MESA/Boogie, Smith has refined and expanded the company’s line of amplifiers and accessories to include nearly 20 variants for guitar, seven for bass, and a host of speaker cabinets, effects, tubes, and speakers.

“I never imagined that the little high gain Boogie® would go on to have such a huge impact on the music of the ‘70s as guitarists finally had the ability to hold notes indefinitely with our newfound sustain in the Boogie circuit...and we were just getting started. It’s an honor to be recognized by the Vintage Guitar community. Our goal at Mesa® today remains unchanged from day one: Build the best musical amplifiers possible, and treat each member of the Mesa musician community, as we ourselves would wish to be treated. We want every musician we serve to become a life-long member of the MESA/Boogie family.”

In addition to the gain circuit Smith is recognized for, his company would go on to introduce a long list of innovations and patents that have shaped the world of electric guitar tone. It’s nearly impossible to find an amplifier on the market today that doesn’t offer a feature that Randall is responsible for. Other notable accomplishments include the world’s first channel switching amplifier, the MARK II™, which MESA/Boogie introduced in 1980. In 2014, the company has proven that a creative environment for innovation is more powerful than ever with the release of the new MARK FIVE: 25™ offering many of the innovations Mesa is famous for in a compact 16lbs. format.

For more information on Vintage Guitar and the Readers’ Choice Awards, visit www.vintageguitar.com.